48 companies in the FTSE 350 have seen their stock market values fall by at least a third since the start of the Ukraine crisis, shows research by Bowmore Asset Management.

The biggest fallers have been technology companies. Review website Trustpilot, which listed just over a year ago, has seen its shares fall the most with a 66.2% decline since the start of the year. This has wiped £750 million off its market value.

This is followed by biotech company Oxford Biomedica with a 60.4% fall and grocery technology company Ocado with a 56.6% drop, knocking £8.5 billion off its market value.

“Businesses that can continue to grow their revenues each year should rebound quickly once the negative sentiment moves from markets.”

Investors have instead been putting money into oil & gas and mining companies that they perceive might do better in the current inflationary environment.

Pockets of value in tech sector

However, given the fall in some tech shares since the start of the year, Bowmore says investors may now be able to find stocks in the tech sector which can offer value to investors.

Some companies which have been in favour with the market in recent years have become significantly cheaper since the start of the year, losing almost half of their market value. This includes software company Kainos, which has fallen 46% since the start of the year, as well as the Scottish Mortgage Investment Trust, which has seen its shares fall 41.8% and now trade on a discount to net asset value.

The biggest stock market winners since the Ukraine crisis have been oil & gas and mining companies, which have been benefitted from a rally in commodities.

Surging demand and tightening supply has seen the price of several commodities, including oil, gas and metals, rise sharply this year. Bowmore says five of the top 10 risers on the FTSE 350 this year have been oil & gas companies.

Two of the biggest beneficiaries have been FTSE 100 oil & gas majors BP and Shell, whose share prices have risen 25% and 42.5% respectively since the start of 2022, adding £20 billion and £73 billion to their market values. 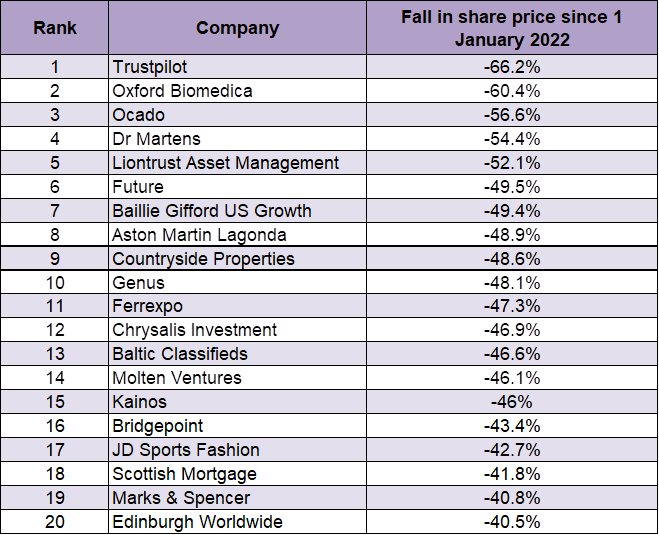