A new Europe in the making: analysis from RBC Wealth on the economic impacts of the Russia-Ukraine war

Frédérique Carrier, Head of Investment Strategy in the British Isles and Asia at RBC Wealth Management

Longer term, the Russia-Ukraine war will certainly transform the European economic and geopolitical order. Peace can no longer be taken for granted. While a dark cloud has descended over the continent today, we believe opportunities in the region remain.

No matter what the outcome of the war may be, a changed EU will emerge in a new era. We highlight key areas of transformation, including a move towards more regional cohesiveness; a revving up of the green energy transition; the absorption of the large influx of refugees; and a relaxation of attitudes towards fiscal discipline.

The bloc surprised many by the decisiveness displayed in swiftly imposing a punishing package of sanctions against Russian oligarchs and institutions. Russia’s invasion of Ukraine has galvanised the EU to open its coffers, including providing Ukraine with €1.2 billion in financial and humanitarian aid and €450 million of military assistance. EU leaders have also accepted Ukraine’s application for EU membership—though the process may well take another 10 years.

The conflict spurred a radical change in Germany’s defence policy almost overnight. Chancellor Olaf Scholz approving the export of lethal weapons to a conflict zone for the first time since World War II is a pivotal action that could encourage further EU cohesion.

The war has also dulled the appeal of eurosceptic parties, both on the far right and far left, which often cited Russian President Vladimir Putin as a role model. This likely reduces the risk of an anti-EU government being elected in France or Italy (elections to be held in April 2022 and in 2024, respectively), and probably positions the bloc more firmly in the center.

Yet we shouldn’t expect complete cohesion on all matters. For one, unlike trade policy where the EU can legislate like a sovereign government, EU foreign and security policy is intergovernmental, so the EU can only act when all members agree. The threat posed by the invasion of Ukraine was so menacing that all members swiftly agreed on a course of action. Had the threat been somewhat less ominous, we believe the EU would have reverted to building a compromise among all members, a process that likely would have prevented it from acting quickly. In other words, as long as the veto system is in place, the EU continues to run the risk of being bogged down in lengthy negotiations among its 27 member states.

French President Emmanuel Macron has been arguing that the time has come for an EU-wide defence policy. This would require amending the EU treaty to do away with the veto system, a move many members remain reluctant to support.

Having said that, fresh on the heels of the success of the EU’s coordinated response to COVID-19, the threat of menacing external aggression will likely shift the balance towards a greater tolerance for EU-level decisions, as opposed to at the national level, as EU member states reflect on common interests and objectives.

The adoption by EU foreign and defence ministers on March 21, 2022 of a “Strategic Compass”—a plan to strengthen the EU’s security and defence policy over the next decade—goes some way to better coordinate EU members in this matter.

Revving up the green transition

Because Europe’s heavy dependence on Russian energy is clearly undesirable, the European Commission has proposed a three-step plan, REPowerEU, to reduce it. In contrast to the U.S., which has banned Russian oil imports, the EU’s plan involves a more gradual approach to wean itself off Russian energy. 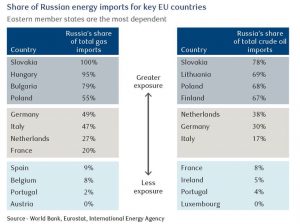 Why bonds are a buy, not a bust

US open: Stocks lower ahead of FOMC minutes

London stocks closed weaker on Tuesday after a slew of economic data, as it emerged that the squeeze on households...

Glencore to pay $1.5bn to settle UK, US investigations

Glencore will reportedly pay $1.5bn to settle US and UK investigations into alleged wrongdoing. According to Bloomberg sources, Glencore's general...

Analysts at Berenberg lowered their target price on engineered ceramics company Vesuvius from 600.0p to 480.0p on Tuesday, highlighting that...

Glencore to pay $1.5bn to settle UK, US investigations