byRebecca Tomes
in Featured
Share this story
A record number of companies are committing to and setting science-based climate targets, according to new research by the Science-Based Targets initiative (SBTi), the global body enabling businesses to set emissions reduction targets in line with science. The SBTi today launches its third annual assessment of the initiative’s impact since its launch in 2015. The 2021 Progress Report ‘Scaling Urgent Corporate Climate Action Worldwide’ reveals that the SBTi has entered a period of exponential growth with SBTi companies now representing over a third of global market capitalization, worth $38 trillion USD – up from 20% in 2020. In 2021, the number of SBTi companies doubled to 2,253, including 1,082 companies with approved targets and 1,171 that committed to set science-based targets. These companies cover 70 countries and 15 industries, with the growth rate averaging at 110 new companies per month in 2021 – compared to 31 in 2020. These figures include 117 financial institutions, which have committed to set science-based targets since 2015. Between January – March 2022, almost 500 companies have set or committed to set science-based targets. Dr Luiz Fernando do Amaral, CEO of the SBTi, said: “The world today is faced with many challenges – there’s the devastating Russian war in Ukraine, the ongoing pandemic and the increasingly urgent climate crisis. At this critical time, we cannot let ourselves be divided. In the face of these existential crises, the SBTi will continue to work with governments, companies and NGOs, through strong collaboration, healthy debate and scientific research to reinforce 1.5°C corporate climate action as the new normal. “The science is clear – we are already experiencing the impacts of climate change, and continuing on the current trajectory equals catastrophe. This report shows that the value the SBTi brings to society is more needed now than ever before – we must continue to drive the exponential growth of science-based targets and make them ‘business as usual’ for companies and financial institutions worldwide.” 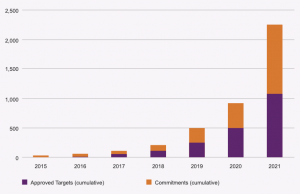 A record year for new approved targets and commitments Legend: Annual cumulative number of companies with approved targets and commitments between 2015 – 2021. As the first assessment of the SBTi’s progress since the COP26 climate summit in Glasgow, the report’s findings evidence a growing wave of international momentum towards science-based targets. The necessity of this momentum is reflected in the latest UN Intergovernmental Panel on Climate Change (IPCC) WGIII report, which concluded that peak global emissions along with rapid and urgent reductions is required before 2025 to keep global heating under 1.5°C. In October 2021, the SBTi launched the Net-Zero Standard, the world’s first framework for corporate net-zero target setting in line with climate science. It includes the guidance, criteria, and recommendations companies need to set science-based net-zero targets consistent with limiting global temperature rise to 1.5°C. The Standard has accelerated the shift towards 1.5°C aligned targets as the new normal for corporates. The report indicates almost 80% of 587 new targets approved in 2021 were aligned with a 1.5°C trajectory. In April 2022, the initiative celebrated a round of new, net-zero approved targets with the total number of companies committed to the Standard surpassing 1,000. The SBTi’s ‘ambition update’ also announced that the global initiative will only accept target submissions aligned with 1.5°C from July 2022, driving companies to go further and faster with their emissions reductions. Lila Karbassi, Chair of the SBTi board and Senior Programme Officer at the United Nations Global Compact, said: “The global economy must halve emissions before 2030 to reach the Paris goal of 1.5°C – and it is currently not on track to do so. This goal is reflected in the most recent IPCC report, which poses a clear message – we must implement rapid and urgent emissions reductions or face planetary catastrophe. The climate action we’re seeing from companies is grounds for optimism, but we must all go further and faster to close the emissions gap.” 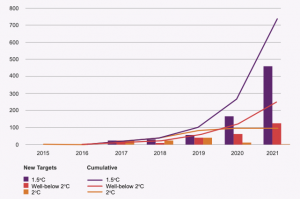 Increasing momentum for 1.5°C  Legend: Temperature alignment and growth of scope 1 and 2 targets between 2015 – 2021. The Progress Report indicates that a critical mass (>20%) of high-impact companies have now joined the SBTi globally (27%). While across key regions (Europe, North America, Latin America and Oceania) more than a quarter high-impact companies have committed to science-based targets.

Title: Majority of world’s regions reached critical mass adoption Legend: High-impact companies’ commitments and approved targets per region as of 31 December 2021. In addition, science-based targets have delivered the biggest emissions reductions to date with SBTi companies reducing emissions at an accelerating pace. The analysis shows that in 2020, SBTi companies have exceeded global trends and collectively achieved 12% scope 1 and 2 emissions reductions, compared to a 5% global emissions reduction due to COVID-19. These emissions reductions as a result of the pandemic were anomalous as by the end of 2021, emissions bounced back alongside the global economic recovery. These numbers clearly show the appetite, and the potential, for companies to tackle the climate crisis via science-based targets – but the report shows more action is still required. A very high proportion of targets are from companies in Europe, North America and Japan, with relatively few elsewhere in Asia, Africa and Latin America. Sectorally, heavy-emitting industries continue to be under-represented. The SBTi is launching its Progress Framework, a new project to provide a standardized mechanism to track organizations’ progress against science-based targets, in early 2023. This measurement, reporting and verification (MRV) framework will build on the SBTi annual Progress Reports to deliver increased transparency and accountability of companies’ progress against their science-based targets. Technical details will be released later this year. The SBTi invites corporates to commit to the Net-Zero Standard– and set near- and long-term 1.5°C aligned targets – and make their critical contribution to limiting the worst impact of climate change. The SBTi Progress Report 2021 can be accessed on the SBTi website. The Progress Report is released annually, previous reports can be accessed here. HIGH-IMPACT SAMPLE METHODOLOGY The high-impact sample has been created following these criteria:
Previous Post