When assessing the impact of the Russia-Ukraine war on Europe, its reliance on Russian gas is often cited as the main vulnerability. Almost half of German gas came from Russia in 2020; and for Finland, Estonia and Latvia the share was even higher (94%, 93% and 79%, respectively).

Less well known is the importance of Russia, Ukraine and Belarus as markets for EU exports. They accounted for 0.8% of EU GDP in 2020, a much larger share than for the US and UK, for example. 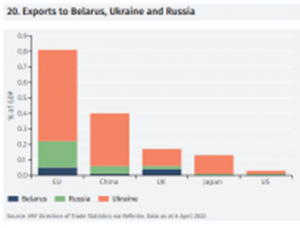 As well as these direct effects on European trade, the indirect effects are likely to be substantial. Higher oil and commodity prices will, effectively, act as a tax on consumers and businesses, raising prices and depressing spending.

A reduction or elimination of dependence on Russian gas could have far-reaching consequences. For Germany, it could lead to a GDP decline in the range of 0.5% to 3%, according to one estimate.

The policy choice for the ECB is either to tighten in order to limit the inflation impact of these developments; or to ease to support growth, but at the risk of creating higher inflation. It seems clear that policy tightening in Europe will not be as marked as in the US. Indeed, we think the ECB is likely to maintain a negative key policy rate for much of 2022 and maybe even into 2023. This likelihood has been reflected in two areas of the financial markets. 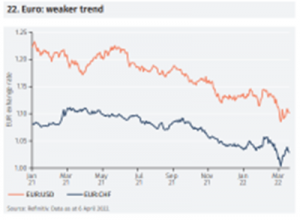 Inflation expectations and the euro

Second, the euro has weakened against the US dollar and the Swiss franc. The weakness against the US dollar is, we think, primarily a reflection of the expected trend in interest rates. Against the Swiss franc, the euro’s weakness reflects a combination of Switzerland’s safe haven status coupled with the fact that Switzerland is much less vulnerable to higher oil and gas prices. Swiss companies’ costs (measured by the producer price index) are up 2.3% since January 2020; in the eurozone, costs are up 31%. That has given Switzerland quite a substantial improvement in its relative price competitiveness over the period. Swiss consumer price inflation seems unlikely to rise much above 2.5%, whereas eurozone inflation, 7.5% in March, is likely to rise further.

The fact that over half of Switzerland’s domestic energy consumption comes from renewables, hydroelectric and nuclear sources gives another dimension to its safe haven status.

Clearly, across Europe, increasing reliance on renewable sources will now take on an even greater importance, but it will inevitably take many years. It will be facilitated by the EU’s Recovery and Resilience Facility, established to assist the recovery from the pandemic but now clearly of even wider importance. It provides grants and loans to member states, totalling up to EUR 730bn, with around 40% being directed to green investment projects. Only Spain has suggested a timescale for its investment spending rollout – spread over five years – but on a more realistic assessment (say, 10 years for the full implementation) the plan could produce a slowburn increase in EU GDP growth, by as much as 0.5% p.a.

Germany’s commitment to increase its defence spending (it is a Nato member but has so far spent less than 2% per annum of GDP, as required by that organisation) will bring another boost to growth. Its example is likely to be followed by other EU Nato members that also lag the spending commitment (Denmark, Italy, the Netherlands and Spain currently spend around 1.5% of GDP on defence, similar to the German rate). Finland, an EU country but not a member of Nato is also reconsidering membership and its spending could also increase.

While these capital spending plans will help boost growth, longer-term growth prospects for the EU remain hampered by a shrinking of the population of working age.

This is already underway and is set to accelerate in the 2030s. Scandinavian countries and Switzerland run counter to that EU trend; but the decline in some eastern European countries looks set to be particularly marked.

The Russia-Ukraine war, superimposed on these perennial challenges, provides a challenging backdrop to the outlook for Europe.

It will be hit hard by the war in Ukraine. Growth will be lower and inflation higher. The ECB’s policy response has to weigh these considerations. We think they will err on the side of caution, keeping interest rates negative.

Another 28 Lloyds branches to be closed, union claims