From time to time, stock markets go through periods of uncertainty. During these periods of turbulence, when the markets are at their most volatile, the automatic response of many is to sell up and revert to what they think is safe – cash.

However, it is important to remember that such periods tend to be short-lived.

Letting your emotions dictate your investment decisions during these uncertain stages can be detrimental to your returns. Pulling your investment in response to market volatility can result in significant losses over the long term, data suggests.

Analysis from 7IM found that if you had invested in the FTSE 100 20 years ago, and missed the best 30 days due to an emotional knee-jerk decision to sell during these periods of volatility, you would have actually lost money, with your annualised return coming in at -2.3%. 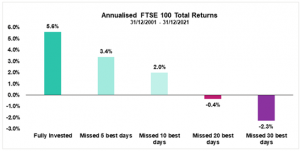 Ben Kumar, Senior Investment Strategist at 7IM, insisted that staying invested and waiting for the markets to settle is the “sensible move”.

He said: “When markets are choppy, people get twitchy. They start thinking that it’s better to be safe, to move to cash and therefore avoid potential pain.

“But those instincts tend to be wrong. Staying invested is the sensible move and not doing so can destroy returns.”

If you had remained invested in the FTSE 100 over the same period, your £100,000 investment would now be worth £295,372 – almost three times more than your original figure, representing a 5.6% annualised return.

Even missing the best 20 days would see a decline in the value of your original investment, with your annualised return down 0.4% at £93,190.

Kumar continued: “Digging into the numbers, 14 of those 20 best days were within two weeks of one of the 20 worst days. Just when you’re feeling most nervous, is when a big bounce is likely!”

Sharp falls in stock markets tend to be concentrated in short periods of time and, similarly, the biggest gains are often clustered together.

It is not uncommon for a large surge to follow a big fall, or vice versa, suggesting that investors who attempt to anticipate when the best time to invest is, run a high risk of missing the largest gains.

London close: Stocks firmer after another high US inflation reading

UK business activity fell in September to the lowest level since January 2021, when the country was in lockdown, according...

The economic outlook remains challenging, but PIMCO believes higher yields contribute to a compelling case for bonds. By Tiffany Wilding,...

UK new car registrations rose for the second successive month of growth in September, according to industry data released on...

Wall Street has stayed buoyant, with a rally continuing on the S&P 500 and Nasdaq Composite indices. Brent crude...