Green government bonds: the promise and the pitfalls – Fidelity International

Green sovereign debt issuance is on the rise and could dramatically improve liquidity and standards across the green bond market as a whole. Investor demand is high, but it is important both not to overpay for green sovereigns and to monitor what issuers do with ‘green’ funds. Kris Atkinson, portfolio manager of the Fidelity Sustainable Reduced Carbon Bond Fund, comments:

Green government bonds were the fastest growing sustainable bond segment in 2020. First-time issuers accounted for 40 per cent of outstanding sovereign green bonds, according to OECD data, with the governments of Germany, Hungary, and Thailand among those making green bond debuts. 2021 has brought further issues of debt to finance green initiatives by countries such as the UK, and further innovations in green bond structures. 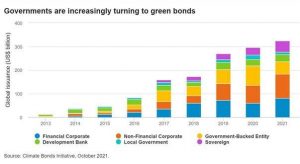 This rapid growth partly reflects the early stage of the green bond market in general and sovereign green bonds in particular, which still account for only 0.2 per cent of OECD government debt. Nonetheless, we expect more governments to issue green bonds as a way of financing large-scale green infrastructure projects and R&D for next generation technologies that will be crucial to achieving the net zero transition. This ‘greening’ of government bonds – the backbone of global fixed income markets – could help resolve some of the pricing, liquidity, and reporting challenges that investors face.

Beware the greenium and illiquidity

High investor demand for green bonds has created a so-called ‘greenium’ (green premium), and the securities frequently offer a lower yield compared to similar bonds without the green label (an exception is China, where greeniums have so far been practically non-existent).

Perhaps the clearest example of a sovereign greenium comes from Germany. On 2 September 2020, the German Finance Agency sold €6.5bn of green Bunds with the same coupon and maturity date as ordinary, non-green Bunds issued a few weeks earlier. The green bond priced at 1 basis point of yield below its vanilla twin and has maintained a lower yield on the secondary market since, trading as much as 7 basis points lower. Two months later, Germany went one better, issuing green and ordinary bonds on the same day with identical coupons and maturities. This November green bond also traded at a greenium.

The popularity of green bonds has led to a tendency to hoard them, reducing liquidity and widening pricing differentials. Those attempting to justify the greenium could argue that green bonds’ relative scarcity should make it easier to sell them. But that is little comfort to those wishing to rebalance portfolios who need to buy green bonds as well. In some cases, a lack of liquidity also increases trading costs.

Greater green sovereign issuance should ameliorate these problems. The greenium has dwindled in corporate bond sectors such as utilities where green issuance is high, and liquidity has improved. For green bonds to go mainstream, however, other challenges need to be addressed. Top of the list are inconsistent reporting standards across different countries.

Standards today are voluntary for all green bonds and often ad hoc. Use of proceeds reported at issuance can differ from those that are reported post-issuance, creating a risk that some issuers will overpromise then fail to meet expectations. Variable reporting and a lack of common terminology and metrics can make it hard to know what the real impact has been and to compare investments.

Help is on the way. Investment standards for green bonds are being developed at a global and regional level, most prominently the EU Green Bond Standard. As these are adopted, the green sovereign market will become more investible and act as a benchmark for green corporate bonds. However, rule makers will need to move carefully. Making it too hard to meet definitions of ‘green’ could constrain supply, and risk exacerbating pricing and liquidity challenges.

Will investors’ wishes for a “Santa Claus Rally” in equity markets be granted this year? A lot will depend on...

by Rebecca Tomes
UK Through The Day

London stocks ended lower on Tuesday as a downbeat reading on the UK construction sector and worries about the pace...

FTSE 250 movers: No greetings for Moonpig; Paragon in the money