Mazars’ Lagarias: A world in disharmony might just be -centrally- unmanageable

“Last week saw the resumption of volatility. American stocks have recovered almost half of their 10% loss, mostly due to soaring energy prices and another good earnings season. More than half of US companies have reported earnings, with a very decent 76% beat of expectations.

“But that’s not how all investors experienced it. Facebook, the global social media behemoth and a key holding for many portfolios, found itself losing more than a quarter of a trillion dollars in capitalisation during one day, as it reported a plateau in new subscribers. Meanwhile, US 10-year bond yields, the bedrock of global asset management, continue to experience steep price declines, as central banks across the world become more hawkish by the day. Last week, even the dovish ECB, which oversees a more rigid and less prone to wage-inflation market, refused to rule out rate hikes in 2022. 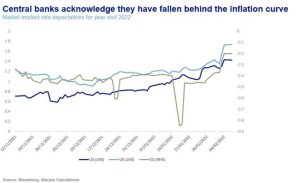 “Overall, January 2022 gave the 60/40 (Equity/Bond) portfolio one of the worst starts in the past twenty years, besides the Global Financial Crisis itself. 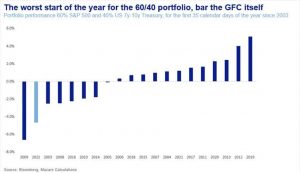 “The enemy, according to Harry Markowitz, the Nobel Laureate and founder of modern portfolio theory is volatility. We would argue it’s also correlations. When the Fed endorsed financial assets, they all correlated on the upside. When that support was abruptly withdrawn, they now correlate on the downside. Asset allocators who rely on diversification have a difficult time.

“Having said that, on our behalf, a three-month, or even a one-year volatility episode is still by and large to be expected. But while the market is fixated on returns and the wild rides of optimistically-priced growth assets, our risk antennas point towards another direction.

“We are more concerned about is the apparent inability of central banks to meaningfully control inflation.

“Central bankers have a very difficult task ahead: They need to moderate wage growth enough to curtail inflation expectations but not too much to prevent a dampening of demand and swift return to secular stagnation. They have a local bullhorn, but a global problem.

“The mission to impact consumers “just so”, would have been delicate even in a closed-economy environment. But the world reminds us exactly how globalised it is. From a global shift towards the purchase of goods during lockdowns, to global supply chain imbalances, to China’s reorganisation and a costly developed market turn to Sustainability, this time inflationary pressures are global and systemic. Yet jobs markets, regulated by national laws, are very much local. So are interest rates.

“Supply-side inflation will probably eventually sort itself out anywhere between six months and two years from now. It will be done in a bottom-up way, and there’s precious little policymakers can do about. It will all depend on the sum of myriads of inventory and logistics decisions. Until that time, it will be difficult for central banks to do much in the way of curtailing price rises. Messaging and moderate interest rate hikes might be their only tools to try and curtail inflation expectations and stem the wave of demands for higher wages. But, much like they couldn’t control global deflation, it is doubtful they can control global inflation.

“And herein lies the risk. Central banks have abandoned market accommodation in favour of trying to moderate inflation expectations. If they are not successful in the latter, then they have stopped performing the function they were good at, absorbing market risk.

“The idea that a big problem can’t be managed centrally poses an existential challenge for institutions whose job is exactly to manage big problems. If their core mandates are redundant, for whatever internal or external reason, can their effort to “do their job”, in essence to confirm their usefulness, result in more harm than good?

“Young consumers who have spent years being priced out of the housing market, while central banks unfetteredly printed money, are now actively warned against seeking wage rises “for the greater good”. Whatever central bank intentions, that particular message might just hit deaf ears.

“Business literature is littered with cases of systems who didn’t realise the need to change, until very late in the game, or who didn’t get change right. Meanwhile, they kept performing normal operations, but ended up with more costs and less benefits. Central banks have been a key component of the post-GFC recovery. We feel that the time is reaching again where their role and independence, will be re-assessed, with implications far and wide for all portfolios, and economies.“

Investors will be treated to a fresh batch of economic data Stateside at the end of the week. Of greatest...

London stocks managed another positive finish on Thursday, as investors digested news of a cost-of-living support package from the Treasury,...

Europe could accelerate the shift from mobile to metaverse

By Marcel Stotzel, Portfolio Manager, Fidelity European Trust Plc The race among tech firms in the US and Asia to...

Europe could accelerate the shift from mobile to metaverse