The US and China are likely reaching peak growth as stimulus and the initial burst of pent-up demand begin to wane. In China, while the credit impulse has turned negative—usually an ominous sign—demand continues to normalise, shifting from outsized demand in manufacturing back to normal patterns of consumption with authorities still fine-tuning the extension of credit to the parts of the real economy that need it. In the US, hopes for a major stimulus focused on infrastructure are likely to be scaled back, but a combination of still-high levels of excess savings, returning jobs and an easy Federal Reserve (Fed) are supportive of continued healthy demand.

Market concerns for inflation have ebbed to a surprising degree, so much so that rates continue to compress with break-evens steadily rolling down from the mid-May peak. When the Fed struck an ever so mild “hawkish” tone, the market reaction was also surprising in the form of a stronger US dollar (USD), a flattening yield curve and a strengthening preference for growth over value. Some are declaring the reflation trade dead; yet, the overwhelming consensus sees 10-year Treasury yields ending the year higher than the 1.74% peak set at March-end, as do we.

The confusion in the markets is likely born out of the confusion in economic data that is rendered mostly useless for the dislocations caused first by COVID-19-induced lockdowns, then an unprecedented, synchronised global stimulus and now the uneven re-openings dependent on the successes of vaccine rollouts. Virtually any disparate view can be supported based on “the data”, but the truth is no one really knows the extent to which things will just get back to normal versus the knock-on effects of some very unusual policies and the resulting excess liquidity still sloshing around the system. We see a heathy growth outlook both for returning demand and continued policy support, but we are cautious about the volatility that will ensue when data clarity returns, exposing those who may be wrongly positioned for what lies ahead.

We continue to favour growth and have further reduced our cautious view on defensives. The Fed sounded marginally more hawkish this month, while the market read the comments as seemingly more pivotal. The USD strengthened and long-end rates actually (and unusually) compressed, signalling an impression that the Fed’s change in stance will depress long-term growth prospects. The market reaction seems overdone, but it may have been amplified by the slow progress on fresh fiscal stimulus that seems increasingly likely to be downsized with each passing day.

The reflation trade took off in November last year, largely driven by the promise of a large “blue wave” stimulus. Given the extent of the optimism priced in, it is not a surprise to see some pullback. The inflation print likely peaked in May due to rolling base effects, but also some inflation pressures may be coming off at the margin, including commodities and supply chain bottlenecks that are beginning to ease. On the growth side, we again reduced emerging market (EM) equities and bonds on the potential headwinds driven by a stronger USD, offset by increases to REITs and high yield. On the defensive side, we reduced inflation assets such as gold in favour of developed market (DM) sovereigns and investment grade (IG).

1 The Multi Asset team’s cross-asset views are expressed at three different levels: (1) growth versus defensive, (2) cross asset within growth and defensive assets, and (3) relative asset views within each asset class. These levels describe our research and intuition that asset classes behave similarly or disparately in predictable ways, such that cross-asset scoring makes sense and ultimately leads to more deliberate and robust portfolio construction. 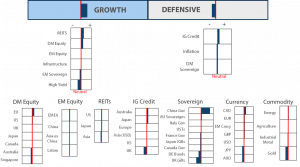 1The asset classes or sectors mentioned herein are a reflection of the portfolio manager’s current view of the investment strategies taken on behalf of the portfolio managed. The research framework is divided into 3 levels of analysis. The scores presented reflect the team’s view of each asset relative to others in its asset class. Scores within each asset class will average to neutral, with the exception of Commodity. These comments should not be constituted as an investment research or recommendation advice. Any prediction, projection or forecast on sectors, the economy and/or the market trends is not necessarily indicative of their future state or likely performances.

The rotation to growth and tech sectors continues while the reflation trade fades. As we have noted before, secular growth remains a compelling opportunity where profit margins remain wide and cash flow abundant. The rotation to value/reopening opportunities is still sensible, but as the Fed considers the timing of its stimulus exit while promises of more fiscal stimulus continue to ebb, it is not a surprise that flows are being redeployed to the “tried and true” tech sector that has delivered phenomenal growth for more than a decade.

The principal driver of the reflation trade is the amount of stimulus—both monetary and fiscal—that has been thrown at the pandemic problem, overtly positioned to err on the side of doing too much than doing too little. Money has flooded into the system worldwide, while excess savings have swelled to record levels, ready to be deployed with the release of pent-up demand on the back of still-limited supply, exacerbated by still-damaged supply chains.

We did witness the boost in pent-up demand including a rotation to services as economies are reopening, but as stimulus is just a one-time cheque and not a full-time job, it seems that consumers are treating their savings more carefully than with the reckless abandon that some had predicted. Services are coming back, while demand for tech and electronics is also staying robust. In other words, while some elements of the reflation trade are at the “wait and see” checkpoint, the outlook for secular growth remains robust and supported by strong earnings. Thus, the pause on the rotation from value back to growth may not be just knee-jerk but actually rational until we get better visibility on the contours of global demand and growth.

The market spotlight over the coming week will be squarely on the US Federal Reserve meets to decide on policy....

Brewin Dolphin, the wealth manager, has announced the promotion of current investment director Janet Mui to head of market analysis....

Crisis-hit transport group Go-Ahead on Monday delayed publication of its financial results for a third time as investigations continue into...

Endeavour Mining reported "strong" fourth quarter production of 398,000 ounces on Monday, up 4% over the third quarter, while its...