The CISI’s latest annual member survey has shown that 55% of its women members surveyed have suffered from stress, anxiety or depression in the last year.

The CISI survey, undertaken this year from May-June, received almost 5,000 responses from the professional body’s global membership, including from those based in UK, Channel Islands and Isle of Man, and Asia but also with respondents from Europe, Africa, South, Central and North America and Australasia. The CISI membership encompasses those working in wealth management, financial planning and capital markets. 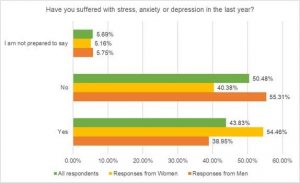 Of the men responding to the question: “Have you suffered with stress, anxiety or depression in the last year?” 39% said “Yes” and 55% “No” (graph above).

Those surveyed were also asked how confident they would feel talking to their manager at work if they felt stressed, anxious or depressed (graph in link below). Of the women respondents, 52% said they felt confident, with 59% of men answering “Confident” to the same question. In 2020 the same question showed ‘Confident’ at 54% for women and 57% for men.

CISI members were asked if they would be returning to the office for the same number of working days as before the lockdown (graph in link below). Responding to this question, 57% of women and 50% of men said “No”. For women in 2020 this was 47% and for men 46% said ‘No’.

Additionally, respondents were asked: “When do you think you will return to working in an office environment?”  When responding to this question, there was little difference in gender as 19% of women vs 18% of men said they were “back into the office for some days a week” with 13% of men vs 11% of women saying they were “back into the office full time.”  The option: “I have worked in the office throughout the pandemic” was chosen by 10% of respondents.

Members were also asked for their views on the state of their sector (graph above) and given several options to select which had most closely applied to their business during the last year. Of those options, 46% of women said they were “working longer hours” (39% for men) and 38% of men said they’d worked their hours more flexibly (40% for women).

Also, 38% of women vs 30% of men indicated that their business is still recruiting during the pandemic.

Simon Culhane, Chartered FCSI, CISI CEO comments: “Since the pandemic, many of us have acknowledged the benefits of working from home, particularly in not having to commute. Our survey, though, has shown that women in our profession appear more stressed and more women have worked longer hours than their male counterparts.

“Working from home for women can be a two-edged sword, as many may still be undertaking wider home and, for those with children, added family responsibilities, particularly regarding home schooling for children.

“Working from home is resulting in blurred work-life boundaries, longer hours and a feeling for some of not being able to take annual leave, which will contribute to an “always on” mentality. These factors could lead to a perfect storm of stressors resulting in burnout and overwork.”

Assemble-at-home furniture giant Ikea is setting up shop in the heart of the West End, buying the flagship site of...