Remember in 2011 when Netflix raised prices by dividing its streaming subscriptions from its DVD service? The announcement sparked an uproar that forced the company to issue an apology and hammered the stock price.

Today the world is in a very different place — and so is Netflix: The company is now a dominant streaming service and a megahit-making machine with more than 213 million subscribers worldwide. Its latest breakout, “Squid Game” — a Korean drama about children’s games played with deadly consequences — captivated some 142 million households, making it the most viewed show in Netflix history.

This rising popularity has empowered the company to boost its prices. It has increased subscription rates in the U.S. four times since 2014, a period of robust subscriber growth globally. This is an example of pricing power, the ability to increase prices without losing customers.

Pricing power can be an antidote for inflation

Pricing power, always a positive for companies that can sustain it, may be a crucial competitive advantage in the year ahead. Inflation has surfaced across many global economies, and there are signs that it could linger in the coming months. The annual inflation rate in the U.S., as measured by the consumer price index, rose to 5.4% in September, its highest level in 13 years. Rising costs can erode a company’s profit margins and, ultimately, investor returns. But companies with clear, sustainable pricing power can protect their profit margins by passing those costs along to customers. 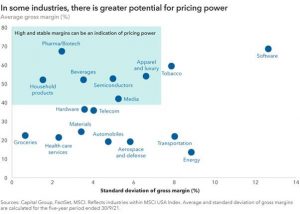 With growth slowing and inflation pressures building, Diana Wagner, an equity portfolio manager is focused on investing in companies with proven pricing power that are also the beneficiaries of secular growth trends.

High medical costs are a perennial ‘hot button’ issue for the government, and for good reason. Over the last 20 years, health care costs have risen at about 2.5 times the rate of broad inflation, as measured by the PCE inflation rate followed by the U.S. Federal Reserve.

Consider UnitedHealth Group, which is focused on helping governments and health care providers reduce spending and improve outcomes for patients. The company has been investing in predictive analytics and care delivery to reduce inefficiencies in the U.S. health care system.

They determined that the most powerful person in the care delivery ecosystem is the primary care doctor, who represents 3 cents of every dollar we spend on health care but determines where another 85 cents is spent. By getting primary care doctors involved earlier in decisions about care, UnitedHealth is seeking to keep members healthy and get more value for every dollar spent. By delivering more value, UnitedHealth can maintain its pricing power while helping to tackle a long-term problem in the US.

2022 multi asset outlook: watching the tide not the waves

London stocks closed in the red on Friday, as investors weighed better-than-expected UK GDP data against slumps for industrial production...

Royal Mail slumped on Friday after JPMorgan Cazenove placed the shares on 'Negative Catalyst Watch' ahead of the company's next...

US open: Stocks mixed as bank earnings roll in

Wall Street stocks were mixed early on Friday as market participants digested earnings from some of the country's biggest banks....

Royal Mail slumped on Friday after JPMorgan Cazenove placed the shares on 'Negative Catalyst Watch' ahead of the company's next...

US open: Stocks mixed as bank earnings roll in