Schroders: Europe’s gas crisis – what does it mean for investors?

Europe faces high gas prices and potential shortages as supply from Russia dwindles. Schroders’ investment experts look at what this means for companies, the energy transition, and the eurozone economy.

Europe’s precarious gas supply situation has been a prime focus for markets ever since Russia’s invasion of Ukraine at the end of February.

The European Union (EU) and others were quick to apply sanctions to Russian oil. However, gas is a more complicated matter given the reliance of major European economies – most notably Germany – on natural gas from Russia.

The situation became even more critical when a major supply pipeline – Nord Stream 1 – was closed for maintenance in July. While the pipeline has now come back onstream, gas is being supplied at a reduced volume. 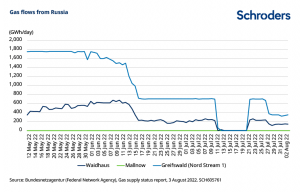 Gas demand is lower in the summer, but this reduced supply puts in jeopardy the EU’s aim of filling gas storage sites to 80% capacity in November this year, and to 90% in 2023.

We asked our investment experts what this means for Europe’s economies and markets.

What is the impact on gas prices?

“Europe is facing an 18-24 month period of very high gas and electricity prices”, said Mark Lacey, Head of Global Resource Equities. “Europe has become and will remain the premium market for gas over this period, with prices above those in Asia or the US. This premium will last until we start to see meaningful new volumes come onstream from 2024/25.” 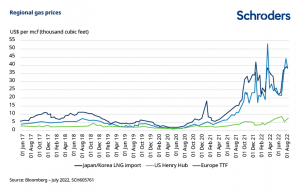 High prices can be tackled via two methods: a reduction in demand or an increase in supply. European countries are taking steps to tackle the demand side.

Azad Zangana, Senior European Economist and Strategist, said: “EU member states recently agreed to a voluntary 15% reduction in the consumption of gas, but this could become mandatory if supply continues to be disrupted.

“While energy inflation fell back from 42% year-on-year (y/y) to 39.7% y/y in the latest reading, we expect further price increases to keep energy and headline inflation elevated in the second half of this year, which in turn will reduce the spending power of households.”

The high prices may in themselves cause demand to drop as users limit their gas consumption.

Mark Lacey said: “Following a price increase of around 400% year-on-year, it is inevitable that some element of demand is destroyed. Gas demand in Europe will likely fall around 10% in 2022. Even at lower prices, it is unlikely to grow significantly in 2023 given the risk of recession.”

The table below indicates how gas demand is expected to fall this year in most parts of Europe. 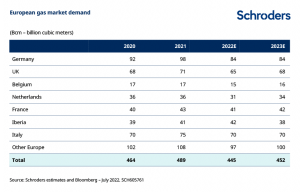 Countries in the EU have very different profiles in terms of the amount of gas previously supplied by Russia.

Environmental Economist Irene Lauro said: “The EU imports 90% of its gas consumption, with Russia providing around 45% of those imports in 2021. Austria and Poland imported more than 80% of gas from Russia in 2021, Germany more than 50%, while for France and Spain the share was less than 8%.”

Some countries have alternative options to gas piped from Russia. Countries such as the UK and Spain have significant LNG (liquified natural gas) capacity, meaning they can receive imported LNG cargoes. Italy has recently signed a series of gas deals with Algeria.

However, there isn’t always the infrastructure in place (regasification plants to turn the LNG back into gas, or the pipelines) to supply this gas to central parts of Europe where it is most urgently needed.

The chart below highlights how renewables can be part of the answer to the gas shortage. The chart shows the average annual percentage of electricity generation dependent on Russian natural gas in blue, while green represents projected renewables growth in the period 2021-23. 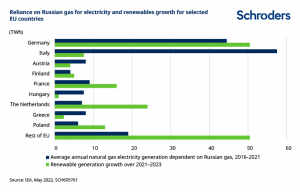 Irene Lauro said: “Germany and Italy heavily rely on Russia in terms of absolute electricity generation. However, based on IEA’s wind and solar expectations for the next two years, and given current policies, the potential for renewables to reduce dependency in Germany is significantly higher than in Italy.

“Meanwhile, France and the Netherlands’ reliance on Russian gas is relatively low, with a significant potential for renewables to displace Russian gas.”