Semiconductors could be the new oil – here’s why

How persistent will the shortage in semiconductors be, and what does it bode for the future of the industry? In our view, the shortage is more cyclical in nature and more acute in a couple of industries like autos and PCs. If anything, we see semiconductors powering the next decade of global growth in an increasingly data-hungry world, much like oil fuelled the rise of industrial economies in the last century.

Importantly, the semiconductor industry has evolved from boom-and-bust cycles marked by excessive capital expenditures, poor inventory management and lack of pricing discipline. It is more disciplined and better positioned today, following years of consolidation that has resulted in a few dominant players along each specialised area of the global supply chain.

On the demand side, as corporations, governments and industries transition to 5G technologies, artificial intelligence (AI) and cloud-based solutions, we believe the industry is prepared to benefit from these powerful tailwinds in the years ahead.

By various estimates, including ours, global semiconductor sales might double from about $450 billion in 2019 to nearly $1 trillion by 2030.

A confluence of events has led to this global crunch, none of which we think are structural in nature or affect long-term demand. The automotive industry simply got caught flat-footed after cancelling orders with manufacturers during the initial months of the pandemic. At the same time, the world went virtual, accelerating everything digital. This shift increased orders for chips used in personal computers, video game devices, home appliances and cloud-based applications.

Personal computers are the most prominent example. While PCs still account for about a third of the overall semiconductor market, this had been an industry in slow decline over the past decade. This changed last year when the market grew at its highest rate in 10 years.

So, when automakers replaced their orders with manufacturers last autumn, there was no capacity for them. Fortunately, the auto sector is a small percentage of the overall semiconductor market, even though it’s a future area of potential growth with the anticipated rise in electric vehicle production. Since it takes about four months to manufacture auto chips, the situation is likely to correct itself by the end of this year. 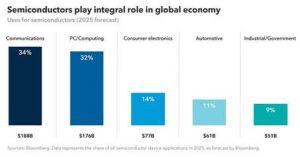 An increasing amount of data is being created every day. It started with social media and people posting pictures and videos of their children, food they ate at restaurants and places they visited. Then, in 2018, machines surpassed humans as the largest data creators. We believe this transformative shift will be a significant catalyst for the semiconductor industry.

Deck chairs at the ready: Mediterranean Banks get their moment in the sun