By Frédérique Carrier, Head of Investment Strategy in the British Isles and Asia at RBC Wealth Management

A cheap and emissions-free technology, solar power has become part of the energy portfolio in most countries. Today’s energy crisis and the quest to achieve net-zero emissions, as well as technological advancements, have enhanced solar’s prospects, most recently in the U.S. where the Inflation Reduction Act promotes clean energy and offers useful incentives. We explore the industry’s potential and how investors can look to tap into this growth opportunity.

Photovoltaic (PV) systems or solar power systems are devices that convert sunlight into electricity. They can take the form of mini-grids for personal use on rooftops, or combined in solar farms to generate electricity on a commercial scale.

Solar energy only really took off this century. The technology, created in the U.S. in 1954, was initially almost exclusively used in the space industry. In 2000, after prices of modules had fallen markedly, Germany passed a law to boost renewable energy development, creating an exploitable market for the solar industry in the process. A fixed price on energy generated from renewable sources encouraged people and companies in Germany to utilize solar panel systems.

China, spotting an opportunity, ramped up solar cell production to a scale which remains unmatched in the West, and the country accounts for 70 percent of global production today. Having gained popularity in Europe, solar energy use has spread globally.

Solar farms are often thought of as only belonging in sunny climes—the world’s largest solar farm with 2.25 gigawatts (GW) of capacity and covering 14,000 acres (56 square kilometers) is located in India. But these installations can operate in colder climates and under cloudy conditions, though with relatively lower efficiency. Alberta boasts Canada’s largest solar farm, the Travers Solar Project, which has 465 megawatts (MW) of capacity spread over 3,300 acres (13.4 square kilometers) and can provide energy for up to 150,000 homes. Solar panels can be built to withstand as much as two meters of snow and temperatures well below zero. 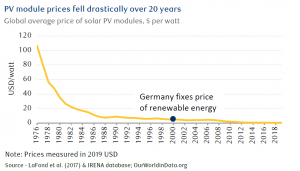 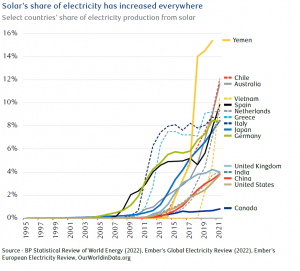 According to the International Energy Agency (IEA), the sun could be the largest source of electricity by 2050, accounting for more than a quarter of worldwide power generation. The IEA estimates that solar PV systems could generate up to 16 percent of the world’s electricity by 2050 while solar thermal power—another solar technology—could provide an additional 11 percent of electricity.

In the more immediate future, BloombergNEF expects new-build solar capacity to grow annually by 11 percent to 2030, with Europe and Asia to add the most capacity, though expansion in North America will be important too, thanks in particular to the U.S.’s recent climate legislation.