Structural change at the office?

By Ignacio Mendez, head of research at Mirabaud Equity Research in Madrid

After the summer holidays, we expect to see normality anew at offices, where all signs suggest that, to a certain extent, teleworking is here to stay. Assuming that the pandemic has no further unpleasant surprises in store for us, most companies in Europe will probably have most of their employees back at their workplaces in September. Statements made by several CEOs indicate that the return will likely differ among companies, as some intend to have all employees back in their seats and others plan to keep them working from their homes. It appears that most will opt for a mixed model that will allow employees to work from home several days a week.

Traditional offices, with family photos on desks, to become a thing of the past. One of the changes that will surely come with teleworking is the way in which offices are set up and used: Rather than assigning a workstation to each employee, desks will be used freely by anyone who needs them. Of course, this will create another problem: Now where do I put the family photo?

Impacts of structural change are always hard to quantify, but it seems safe to estimate an impact of around 5% from teleworking. Although we all know that these changes will affect offices significantly, it is particularly difficult to quantify the impact. This often happens when structural change affects industries in which there are no precedents to use as a reference. Be that as it may, we can roughly estimate the impact by considering that most policies will probably have employees teleworking one day a week, which implies 20% unused office space. We think only half of all employees will opt for teleworking, which would reduce the unused space to 10%, and we assume that companies will operate with extra space so that all their employees may be at the office on the same day, which would further reduce the impact to 5%. It seems logical, then, to assume that the impact of the new scenario will be approximately 5% and less than 10% in the worst of cases.

Impact may not seem significant, but it could amount to nearly three years of demand of normalised rent. An impact of 5% seems to be scant cause for concern, and it certainly does not seem to imply drastic change in the office market. However, if we use as an example Madrid and its 15 million square meters of office space, a 5% impact would mean another 750,000 square meters of unused space, which would take three to four years to occupy under net demand, even during periods of solid demand.

Furthermore, demand is far from reaching normalised levels. In nearly all industries, demand collapsed with the onset of the pandemic. But the most significant development in the case at hand is that, unlike most other activities, office rental has failed to recover in subsequent months. Those who wish to see the bottle half full say that demand remains affected by pandemic-related restrictions and that it will return with normality, and those who wish to see it half empty assume that demand will remain very weak due to the impact of teleworking and that nobody is going to look for new rental arrangements, at least until we have a clear idea of the ultimate consequence of teleworking, which, in the best of cases, will likely delay recovery until 2022. 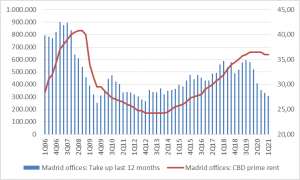 It must be observed that, prior to the pandemic, office markets around the world were at all-time highs, as offices were perceived to be an alternative asset to fixed-income securities. Prior to the pandemic, office rents in nearly every part of the world were at all-time highs and demanded yields were at all-time lows, which drove valuations to unprecedented levels. For the time being, appraisers are waiting to see how rents will perform in coming months, although all signs suggest that we are going to see substantial cutbacks and that yield upturns are likely. The collapse of investment in office space is a clear sign that things are changing in the industry. 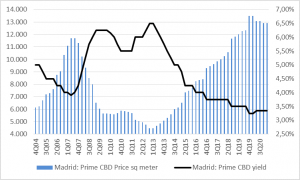 The structural change we are seeing probably means that the industry is facing a long road ahead. Shortly after I began to work in the stock market, one of my first bosses told me that unsuspected structural change is the worst thing that can happen to the stock performance of an industry registering record highs. In recent years, we have seen many examples of industries doomed by technological change, by regulatory change, etc. In our opinion, what we are seeing in real estate is structural change occurring in an industry that was registering all-time highs, which strongly suggests that the road ahead will be difficult in the coming years. Anyway even in this kind of asset, the markets overreact and there will be always moments that open opportunities to invest.

FCA to scrap permissions faster in war on scams

St James's Place reported another strong fourth quarter on Thursday, pushing new business for the full year to a record...

European shares slumped at the opening on Thursday, tracking losses on Wall Street after US Federal Reserve chairman Jerome Powell...

The market spotlight on Thursday will be on a preliminary reading for US gross domestic product growth over the last...

Bootmaker Dr Martens said on Thursday that third-quarter group revenues were in line with internal expectations at £307.0m, up 11%...