The great resignation: the social challenge for companies

After the Great Depression of 1930 and the Great Recession of 2008, now comes the “Great Resignation”. It is no longer possible to escape this term, so much so that it is stirring the media and causing concern among American companies.

Coined in 2021 in the United States by Anthony Klotz, a professor of organisational psychology, the term refers to a large-scale protest movement by employees concerning their jobs, resulting in a massive wave of resignations and major strikes. This phenomenon, which reflects a widespread lack of social well-being, exacerbated by months of pandemic, is becoming the principal social issue for companies. Not addressing it would be risky.

Employment crises are not new. However, unlike previous crises in history —which were primarily economic in origin, putting millions of people out of work, the current period is rather favourable for job seekers in practically all industry sectors. The US unemployment rate has fallen to a record low in recent months (3.9% in December 2021). What is the extent of these departures? Since the spring of 2021, millions of Americans have been leaving their jobs each month without necessarily having the security of a new job (with many reassured by the progress made in managing Covid). According to Bureau of Labor Statistics figures, 38 million Americans left their jobs in 2021 (out of a total of 162 million jobs). November 2021 alone saw some 4.5 million employees leave the workforce. 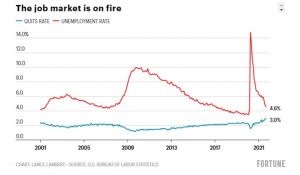 This trend is less spectacular in Switzerland or France, which have a less “fluid” labour market, but it is nevertheless present, particularly in sectors heavily impacted by the effects of Covid (health, catering, and tourism). Many Swiss nursing staff, particularly nurses and care assistants, have thrown in the towel in recent months, exhausted by months of intensive commitment. Another significant phenomenon in recent months has been the proliferation of mass strikes in the United States within companies that are not well known for their defence of trade union liberty. Kellogg’s’ 1,400 employees were protesting for months against excessive working hours during the peak of the pandemic, the deterioration of earnings (salaries and pensions), but also simply against the lack of recognition shown by the company.

Salary an explanation – but not just that

Of course, the prospect of better pay conditions elsewhere is a major reason for these mass desertions. This is particularly true for the most fragile employees who have fought on the front lines against Covid, in precarious jobs, considered to be low-skilled. Many former hospitality workers, for example, now work for giants such as Amazon or Walmart, still in low-skilled and difficult jobs, but (only slightly) better paid and more stable given the demand for consumer goods. In September 2021, Amazon announced its intention to increase its hourly wage to $18. Other reasons mentioned in the surveys, apart from salary, include lack of health protection or stress leading to burnout. For white-collar workers, the key factors are the need for more flexibility and concrete development opportunities. 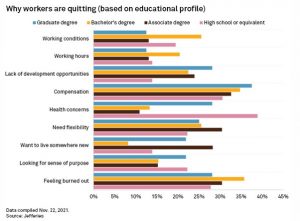 Quality of work: the major social issue for companies

As one can see from this graph, the problems experienced at work vary according to levels of qualifications, sector and age. Contrary to the boomers, the representatives of generation Z clearly express other motivations than salary and the traditional search for power within a company. It is essential that companies seize upon these new aspirations and completely revise an organisational model that was already being questioned before the arrival of Covid. Surveys, such as the one conducted by McKinsey in September 2021, reveal discrepancies between the real aspirations of employees and those that employers often falsely attribute to their staff members. The search for meaning in work, flexibility in the way work is done (fewer fixed hours, the possibility of working remotely), the valuing of work by the employer, as well as the ethics and values of the organisation they work for have become essential to strengthen loyalty. New initiatives are all the more necessary as the shortage, be it of labour or “talent”, will cost companies dearly, both financially and in terms of reputation.

Russia pledges to scale back military activity around Kyiv

Citi and Morgan Stanley ‘mixed’ on outlook for airlines

Europe midday: Shares firmly in the green on possible signs of progress in Russia-Ukraine talks

London stocks ended a little higher on Friday, supported by a strong showing from the recently-battered housebuilding sector and an...

Carnival shares sank on Friday after the cruise operator said it expects to make a loss in the fourth quarter....

Analysts at Berenberg raised their target price on exploration and development company Capricorn Energy from 225.0p to 250.0p on Friday...