Since the turn of the millennium we’ve all got used to inflation being low and stable. That era is well and truly over. Schroders Senior Emerging Markets Economist David Rees analyses how inflation is expected to perform over the medium-term.

Inflation in the G7 group of countries climbed to 7% year-on-year (y/y) in March. As you can see in the chart below, this is the highest rate recorded in almost four decades. Headline rates of inflation are above central banks’ targets in virtually every major developed and emerging market economy.

Chart: G7 inflation climbed to a multi-decade high in March 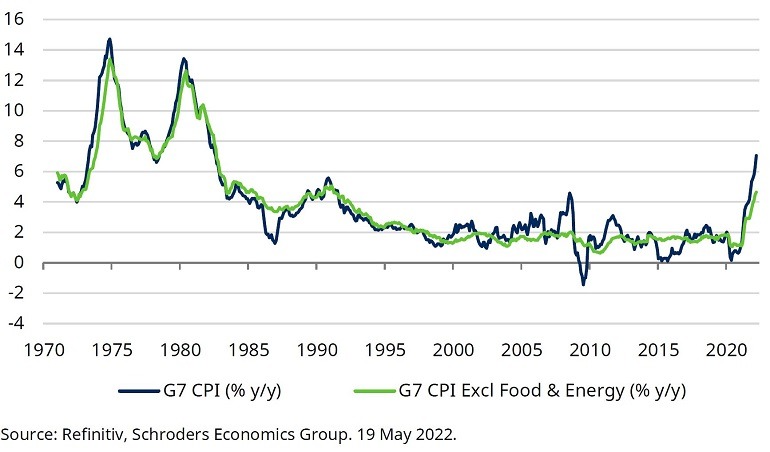 How did we get here?

The roots of the current bout of global inflation can be traced back to the start of the Covid-19 pandemic, when a large imbalance between the supply of and demand for goods emerged.

The global economy contracted sharply in the first half of 2020 as lockdowns were imposed, but what followed was an unusual recession as most households were shielded from economic pain. Many were able to continue to work from home on full pay, while the finances of many other household were protected by government schemes, with the result that in aggregate net savings rose sharply.

With consumers flush with cash and most parts of the global economy closed, notably the services sector, pent-up demand was squeezed into the goods sector. For example, retail sales in the US climbed by 20% in just one year and continue to power ahead as the economic recovery has gathered pace.

Even in normal economic times, the supply of goods would struggle to keep pace with such a large jump in demand.

Strains in production were exacerbated by Covid lockdowns and disruption to shipping channels. Shortages of goods caused supplier delivery times to deteriorate and the imbalance between supply and demand fed through to higher prices.

More recently, the spill-over from tragic events in Ukraine have exacerbated those underlying inflation trends as commodity prices have soared. That has poured fuel on the fire and lifted inflation yet further. 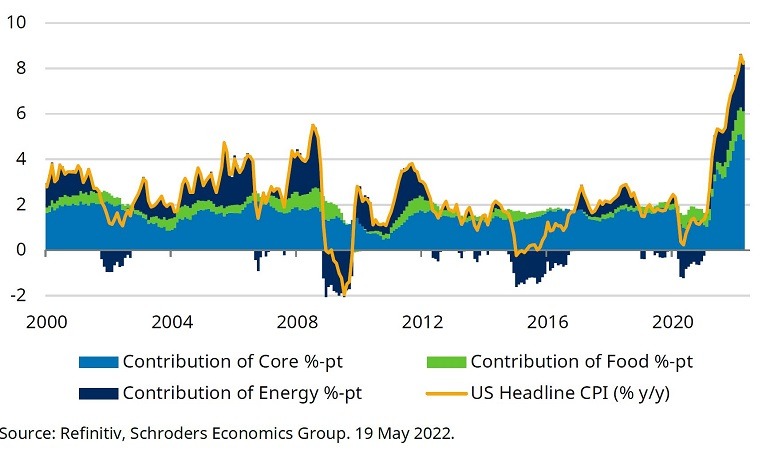 Three reasons inflation is likely to stay higher for longer

The peak in global inflation is probably not far away. For some countries it’s likely to already be in the rear view mirror, such as the US.

Although headline rates of inflation may soon begin to decline, concerns remain that they will do so relatively slowly for at least three reasons.

Reason 1: The impact of China’s zero-Covid policy on supply chains

First, the continued zero-Covid policy in China means that supply chain bottlenecks are likely to persist for some time. The imposition of lockdowns hit China’s economy hard in April and is likely to ensure that economic output (GDP) will contract in the second quarter compared to the previous quarter.

And while the lockdowns have hit the domestic economy hard, they are likely to have far-reaching consequences for the rest of the world.

After all, China has become central to global supply chains and the restrictions put in place to contain Covid have severely hampered manufacturing activity and caused a logjam in transport infrastructure. For example, an aggregate of daily data on container ship congestion across 55 major ports in China has risen as boats have been forced to wait to be loaded and unloaded.

As the chart below shows, this has historically been a sign that supplier delivery times will lengthen and there is a risk that supply chains will deteriorate markedly again. 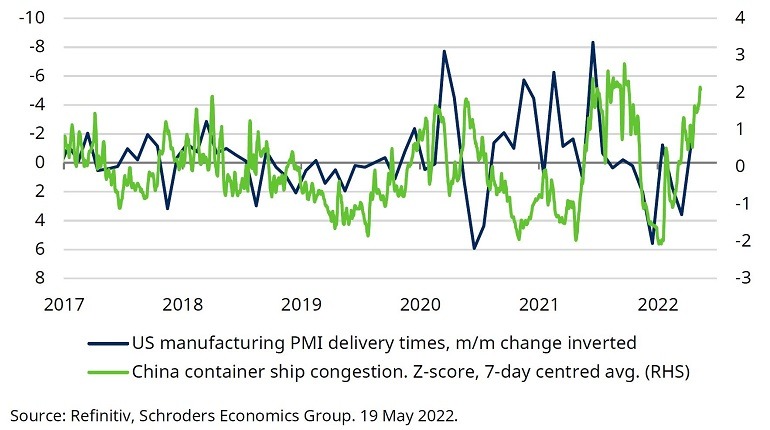 Energy prices have stabilised since the initial shock to markets that followed the invasion of Ukraine by Russia. But they remain high and could go higher again.

Russia has cut off the supply of gas to Poland and Bulgaria and the threat to stop supplying other larger European countries remains. At the same time, the EU is trying to reach an agreement on a new round of sanctions that would include an embargo on Russian energy, potentially as soon as the end of 2022.

However, it is perhaps food prices that are the greatest threat. According to the UN’s FAO index, food prices have already climbed by about 20% so far this year in nominal, US-dollar terms (see chart below). And the huge price shock in the fertiliser market means there is a risk that higher food costs persist. After all, Russia and Belarus have historically been important sources fertiliser for the global economy. The long production cycle in agriculture means that these higher input costs could keep prices elevated for some time. 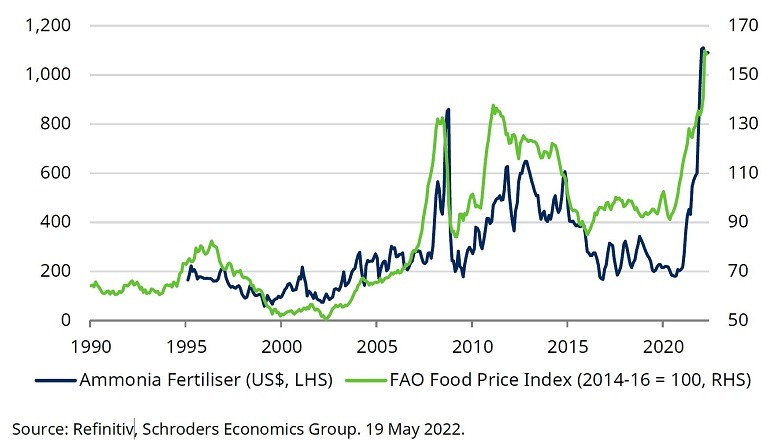 Meanwhile, climate change is also affecting crop production in some key markets such as India. This is a particular threat to emerging markets, where food accounts for a relatively large proportion of CPI baskets and past spikes in prices have provided the spark for social unrest, such as the Arab Spring in 2010.

A third concern for the inflation outlook comes from the services sector. This is an area that is only just revving up as fading concerns about Covid have seen demand start to rebalance back from the consumption of manufactured goods.

Incoming data from the UK, which was the first major economy to abandon Covid restrictions, have shown a clear shift in demand back towards services. And as the chart below shows, in the US service sector output is only just returning to pre-pandemic levels and is likely to climb further as demand returns. 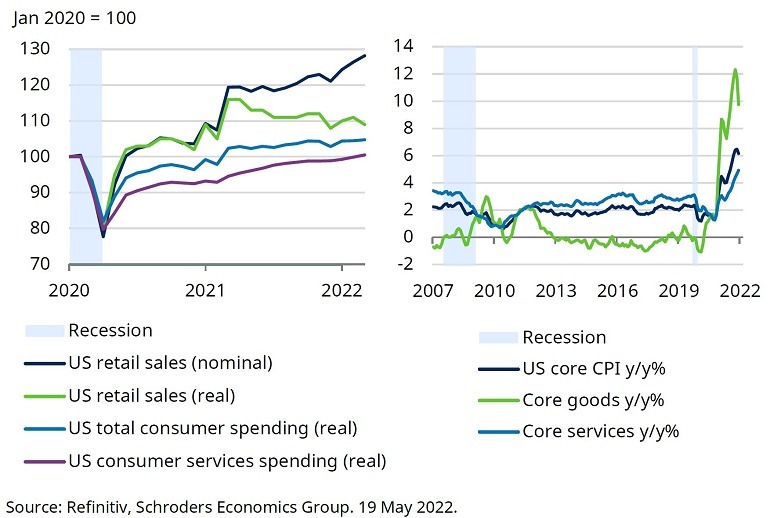 A resurgence in service sector demand is likely to require more workers at a time when unemployment is already very low and wages are rising. Service sector activity tends to be labour intensive and therefore output prices are particularly sensitive to wage costs. This raises the risk that services could soon take over as the key driver of inflation to add to fears of a wage-price spiral.

What are we forecasting for inflation?

Within that, much of the upward revision comes from developed markets. Incoming data suggest that inflation in the US peaked at 8.6% in March. We expect it to trend lower in the months ahead, but only to return to the Federal Reserve’s 2% target by the fourth quarter of 2023.

We expect the peak in inflation in the UK and euro area to be a bit later, in Q2 and Q3 respectively. However, while we think that inflation in the eurozone will fall back below 2% in the second half of next year, we expect UK inflation to remain above target throughout 2023.

US gas opportunity emerges after decades of decay

GlaxoSmithKline to buy US biopharmaceutical firm Affinivax in $3.3bn deal