Top 25 banks by market capitalization continued to maintain stability in their market values in Q1 2022 despite Russia-Ukraine crisis, says GlobalData

Amid the ongoing Russia-Ukraine crisis, the aggregate market capitalization (MCap) of the global top 25 banks remained stable at $3.8 trillion in Q1 2022*, according to GlobalData. The leading data and analytics company notes that not only did 15 out of the 25 banks report growth over Q4 2021**, but the most impressive performers—Mitsubishi UFJ, National Australia Bank, HSBC, Al Rajhi Banking & Investment, and Saudi National Bank—reported over 10% quarter-on-quarter (q-o-q) growth in their market values. 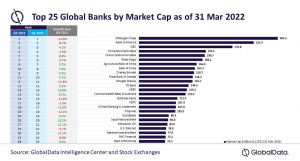 GlobalData analyzes the results of key banks in the top 25 banks by MCap ranking:

For the nine months ending December 31, 2021, Mitsubishi UFJ reported an approximate 76% increase in its net profits over the corresponding period in 2020, which caused its market value to grow by 15.1%. This improvement was driven by a decline in interest expenses, and higher trust fees and fees and commission income.

Large Australian commercial banks such as National Australia Bank and Commercial Bank of Australia have been benefiting from an improvement in the quality of business and home loans, as well as an increase in housing prices, which has strengthened their home loan portfolios.

HSBC continued to maintain the momentum that it has been reporting in recent quarters. A substantial improvement in the expected credit losses and other credit impairment charges strengthened the bank’s profitability (profit after tax), which amounted to $14.7 million in 2021, reflecting an annual increase of approximately 141%.

Al Rajhi Banking & Investment posted a y-o-y increase of 39% in its net income in 2021, which was fueled by a 24% rise in operating income on account of a higher net financing and investment income and higher fee income from banking services. An operating efficiency of 26.9% in FY2021, as compared to 32.5% in FY2020, also bolstered the bank’s profitability. This impressive performance was translated into the bank gaining 13.3% in its market value.

Saudi National Bank’s acquisition of Samba Financial Group in January 2022 brought cheers from the investors. The acquisition and subsequent merger was the fastest and largest merger in the Middle East’s banking history.

Out of the top 10 market value losers, eight were from the US and suffered mostly due to the Russia-Ukraine crisis. The most notable were Goldman Sachs and Citigroup.

With a gross exposure of around $1 billion, Goldman Sachs announced its exit from Russia, while Citigroup’s Russian exposure was around $10 billion. Citi was in the process of selling its Russian consumer banking subsidiary however, the crisis could force it to wind down its consumer banking operations in the country. Both of these banks accounted for about 75% of the US banks’ exposure to Russia.

JPMorgan Chase reported disappointing Q4 2021 earnings results with a net profitability of $10.4 billion, reflecting a q-o-q decline of 11% and a corresponding period decline in 2020 of 14.3%.

Parth Vala, Company Profiles Analyst at GlobalData, comments: “With the global economy on uncertain ground following fast changing geopolitical scenarios and the potential threat of new COVID-19 variants, 2022 is likely to be another challenging year for the banking sector.”

Taylor Wimpey on track to deliver against FY guidance

Will investors’ wishes for a “Santa Claus Rally” in equity markets be granted this year? A lot will depend on...

by Rebecca Tomes
UK Through The Day

London stocks ended lower on Tuesday as a downbeat reading on the UK construction sector and worries about the pace...

FTSE 250 movers: No greetings for Moonpig; Paragon in the money