Warnings signs of longer-lasting inflation are starting to build

Last month’s release of UK inflation data saw a significant surprise to the upside relative to expectations, with headline CPI rising from 1.3% to 2.1% year on year, and RPI rising from 2.9% to 3.3%. Whilst much of this jump will of course, but justifiably, be put down to transient factors (energy, fuel, transport, hotels, clothing, package holidays, and restaurants), it should cause investors to question whether all of the upward pressure is temporary, or whether once the transient factors subside, inflation will be left at an elevated rate.

Warnings signs of longer-lasting inflation are starting to build: core CPI (which excludes fuel, alcohol and tobacco) rose from 1.3% to 2%, and wages released yesterday (along with a raft of other pretty strong employment data) rose to levels well above 5% higher than year ago numbers. We will continue to watch core inflation and particularly wages for giving indications around whether inflation will prove to be more lasting than many believe. Wage cycles are long lasting, and can become self-fulfilling via inflation expectations more broadly, and this will be key.

In terms of how the markets are set up presently, observing levels of nominal bond yields globally suggests that markets are of the same view as the Federal Reserve, namely that the vast majority of higher inflation prints at the moment will prove shortly to be transient. However, looking at nominal yields is too narrow a view: breakevens in the UK and US (and even Europe) have been on a sustained rise for more than a year now, and in the US and UK show that index linked bond investors are concerned about inflation being above ‘targets’ (whatever that now is in the US under AIT, and whatever the wedge turns out to be post RPI reform in 2030 in the UK) for as far as the eye can see. This is clearly demonstrated by US breakevens being above 2.5% at 5yrs and at 2.4% at 30yrs, and by UK breakevens being at 3.4% for 5yrs and 3.4% for 50yrs. As for why the nominal yield markets appear to be pricing so benign an inflation outlook, whilst inflation markets appear to be pricing in a sustained and meaningful overshoot to inflation targets? Well, QE continues apace which supports nominal yields. Deeply negative real yields feels likely to be a completely desirable and long term policy outcome for central bankers. And ultimately, if nominal yields rise too far (whether on the grounds of inflation concerns or otherwise), with such historically high levels of government indebtedness, the central banks are likely to keep suppressing yields via QE and other policies for many years to come. 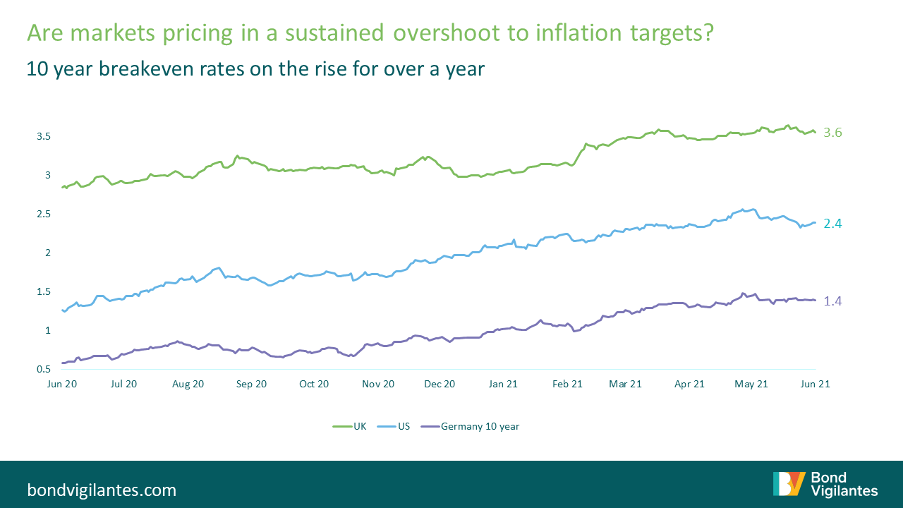 Strategically, given the likelihood of continued central bank support of nominal yields, and inflation prints that are starting to appear as though they may be more sustainably above target levels than they have been for a very long time, I think it still makes sense, long term, to own real yields. If nominals are supported and inflation stays sticky, real yields are a good thing to own. More tactically, though, with breakevens at pretty elevated levels across all maturities, it feels to me to be more likely than not, that we see a rise in real yields. This could be either because inflation outcomes start to fall back, bringing breakevens with them (and so real yields higher). It could just as well be because nominal yields rise, pulling real yields with them. It is always worth remembering that the hugely dominant driver of real yields remains nominal yields. For this reason, as we head through peak base effects and peak growth over the next few quarters, investors should be thinking more closely about limiting the effects from rises in real yields. But that time has not come yet, and the wind feels very much in the sails of inflation in the here and now.

The principle risk to yields at the moment, and therefore real yields too, is central banks. Any hawkish turn could see a step higher in yields. This should also put something of a dampener on breakevens, which would see real yields underperform nominals. However, if this is not imminent, super accommodative monetary (and fiscal) policy will likely see economic data continue to be strong, and will see inflation expectations build further from here, and so real yields remain supported or perhaps even move lower.

To find out more about M&G Investments, click here.

The views expressed in this article should not be taken as a recommendation, advice or forecast.

When you’re deciding how to invest, it’s important to remember that the value of investments goes up and down. So how much your investments are worth will fluctuate over time, and you may get back less than the original amount you invested.

For financial advisers only. Not for onward distribution. No other persons should rely on any information contained within. This financial promotion is issued by M&G Securities Limited which is authorised and regulated by the Financial Conduct Authority in the UK and provides ISAs and other investment products. The company’s registered office is 10 Fenchurch Avenue, London EC3M 5AG. Registered in England and Wales. Registered Number 90776.

US open: Dow Jones in the red after Independence Day long weekend

Market volatility: reasons to be fearful and cheerful

By Charles-Henry Monchau, chief investment officer, Syz Bank Since its June lows, the S&P 500 has rebounded more than 15%....