The word “Transitory” hasn’t aged particularly well for the central bankers who expected inflation rates to be only temporarily elevated back in mid- 2021. Fast forward several months, there are increasing signs that persistent inflation is likely to stay with us for longer than originally expected. The latest UK CPI reading for May represents a 40-year high.

The low interest rate environment over the past decade or so has meant that clearing the inflation hurdle hasn’t been difficult for many years. But when inflation does materialize, particularly at higher levels, its impact can be widespread devastation. Investors with shorter time horizons, who typically have greater exposure to bonds, are particularly vulnerable, often retirees, who no longer generate income that could potentially rise to inflation-adjusted levels.

This leaves discretionary fund managers (DFMs) with two key questions. (1) If inflation is inconsistent–and unpredictable–how do you protect your client’s portfolio from it? (2) Given that both bonds and stocks are vulnerable to inflation, is there anything you can do to protect against it, even if you could see it coming (without having to switch to niche markets such as precious metals or cryptocurrencies)?

Equities, often the core component of scheme portfolios, are challenged by rising inflation. The valuation of growth companies, for example, are based on future profit expectations, which increased inflation has dampened at the present time. In addition, companies from particularly competitive sectors, in which price increases cannot easily be passed on to customers, also cope poorly with increased inflation – consumer goods manufacturers are one example.

Fund selectors and managers could try solving this problem by diversifying equity investments across different countries and industries, such as with ETFs on broad equity indexes. And indeed, the MSCI World, for example, has performed 6.2 percent per annum since 1999, still about four percentage points above the average inflation rate as measured by the U.S. Consumer Price Index.

However, one sector dwarfs this performance in comparison with inflation. Infrastructure stocks, as measured by the NMX Infrastructure Composite, have returned 9.9 percent per year over the same period, about seven percentage points more than the average inflation rate. 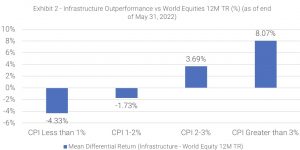 In fact, it is in times of high inflation when infrastructure stocks show their full strength (see exhibit 2). When the average annual inflation rate is above three percent, for example, the average excess return of infrastructure stocks over the MSCI World is 8.1 percentage points. Even when inflation rates trend lower, say between two and three percent, it still delivers 3.7 percentage points of outperformance per year.

Implicitly, this shows that equity markets, broadly, don’t offer the best inflation protection per se. Contrastingly, the evidence points to infrastructure stocks doing just that. This makes them particularly attractive in the current environment for private client portfolios.

The ‘type’ of infrastructure stock that protects against inflation

Currently, schemes that want to include infrastructure stocks in their allocation are challenged by the fact an applicable definition of “infrastructure” does not exist in the financial market. If you search for infrastructure companies for example on Bloomberg, you will find an abundance of companies coming under this banner, many of which fall into the area of “infrastructure-related services”.

It has special economic characteristics that other infrastructure-related services companies lack, including high market entry barriers, positive economies of scale and a natural monopoly position. Combine these with highly predictable cashflows due to the stable demand for their services, and the positive side effect of this is higher average credit ratings and lower default rates, something evident during the Covid 19 pandemic, when operators of power grids or cell towers fared much better than power producers, for example. Moreover, many core infrastructure subsectors, pricing models or concession contracts are highly regulated, often linking to inflation.

CRH to buy US fencing maker Barrette in $1.9bn deal